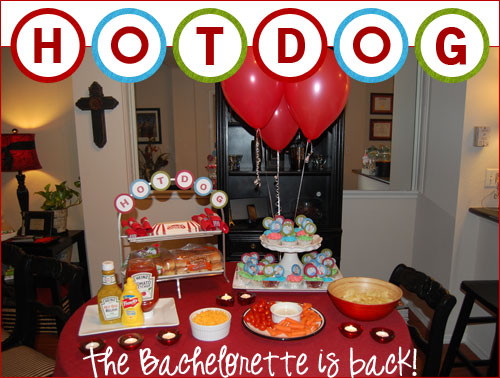 HOT DOG! The Bachelorette is back! And what a better way to celebrate than a party appropriately themed to reflect our new bachelorette’s philosophy on men and hot dog condiments?!

As many of my readers already know, my girlfriends and I are huge fans of the Bachelor. For those non-bachelor fans out there, last season Jillian immediately caught the attention of Bachelor Jason when she explained her theory regarding men and hot dog toppings:

“Ketchup guy is a good, strong, loyal, loving guy. He loves his mom and talks to her several times a week. Sauerkraut guy is the bad boy who they all go for. The onion guy – they all love him, but he’s never going to get married. And the mustard guy, that’s the guy who they all want to settle down with, because he’s part ketchup, part sauerkraut.”

While Jason claimed to be a mustard he acted like a kraut, leaving us with a brand new Bachelorette, and even more important, a reason to party!

Since the theme was based on hot dogs, the food ended up becoming the central décor element of the party. In fact, I’m doing an entire post on the menu! Instead of plates, guests used ballpark-like hot dog boats. (24 for $2.99 at Hobby Lobby) I used larger ramekins to serve chili and cheese and set out relish, ketchup and mustard on a white platter. 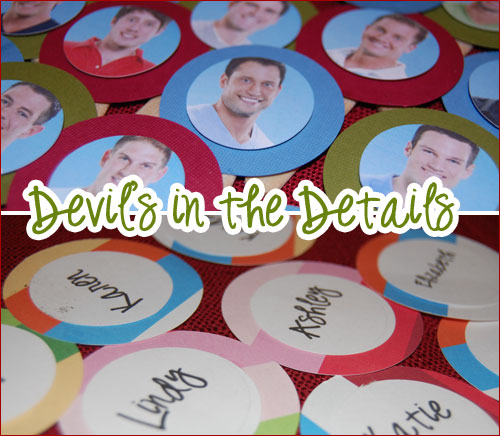 My favorite part of the décor was the cupcake toppers with pictures of all 30 of Jillian’s potential suitors. Not only did they add to the decoration, but the girls had a great time hovering around to decide who was the cutest before the show began! 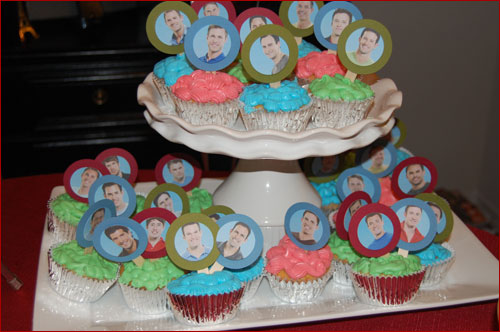 Traditionally on our bachelor nights the guests bring wine and the hostess provides food and snacks. Since wine and hot dogs don’t really go together I wanted to provide a cocktail alternative.

After pouring over countless blogs looking for a great cocktail recipe I was still undecided on what to serve. At the last minute while browsing the aisles at the grocery I brilliantly decided to purchase a jug of Carlos Rossi Sangria. ($10.89 for 3L) It was cheap and easy; my two requirements! 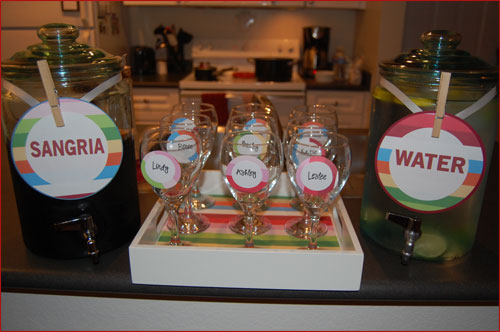 I garnished with lemon, lime and orange slices which added flavor and a splash of color. The sangria was a HUGE hit and the jug provided multiple glasses for my 10 guests. I could have probably used a second one but one did the job just fine.

To dress up my drink station I splurged on two cold beverage dispensers at Crate and Barrel. ($39.99 a piece) I am so glad I did! They were beyond cute and I am sure I will use them a ton for future parties. Plus I used a gift card so they were essentially free! 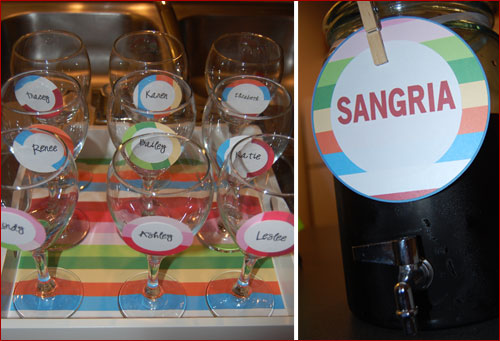 I used my new CutterBug circle cutter ($17 with Coupon at Hobby Lobby) to create signs for the drinks. I used leftover scrapbook paper to make circle drink markers which I adhered to wine glasses with 3-D glue dots. I lined the bottom of my white tray with scrapbook paper ($22 at West Elm).

Oddly enough, the season premier is usually the least exciting episode of the season. Since you aren’t yet familiar with all of the contestants there isn’t too much drama at the rose ceremony. To spice it up I created sheets with a picture, name, age, hometown and profession of each of the Bachelors. Before the rose ceremony we paused the show and each guest had to choose who they thought would move on. The person with the most right would be awarded with a bottle of wine and a trashy magazine. 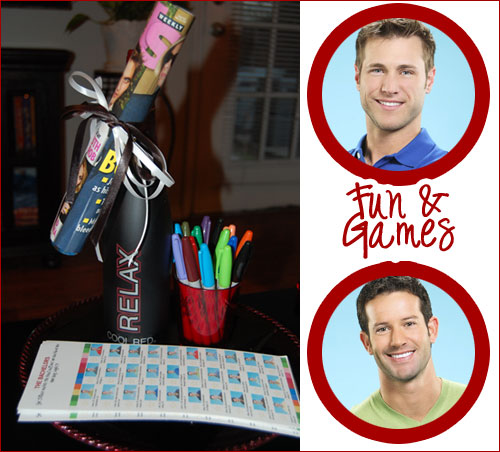 What a great idea! The girls got really into it, with most taking notes on their sheet as the episode progressed. We ended up having four guests tie with 16 correct guesses! We folded them up and drew out of a hat for the winner.

All in all, it was a super successful party. I had SO much fun and I was really happy with how cute everything turned out! For the record, my two favs are Jake and Kiptyn (shown above). Aren’t they cuties?! Who do you think will win Jillian’s heart?! Leave me a comment below!

To see more pictures of this party, visit my flickr album: “Hot Dog! The Bachelorette is Back!” or my post on the menu! 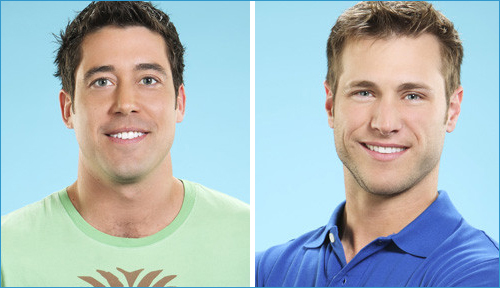 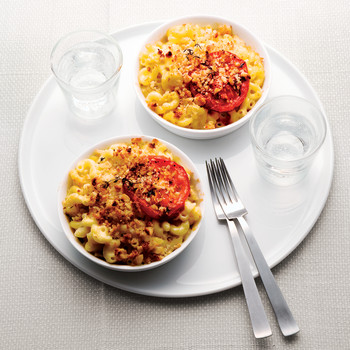 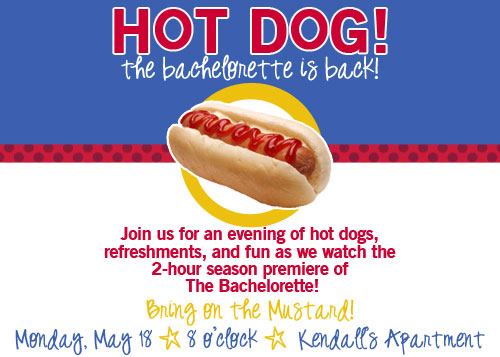