Each year all of my coworkers gather together for our annual company holiday lunch. We cater in food to our office and enjoy an afternoon of eating and chatting. Last year when my boss asked me to pitch in for the planning, I asked if I could take things up a notch and decorate for the event. A $50 budget was all I would need, I promised. He agreed, and I got to work! 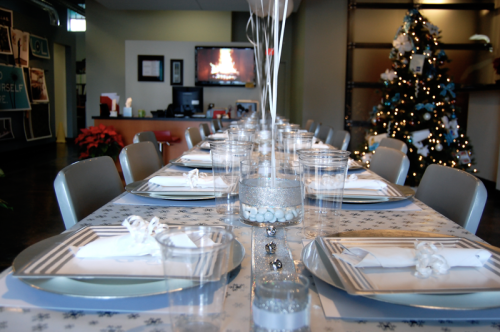 Half of me really wanted to do something neat for the event to make it special for my coworkers. The other half of me was intrigued by the challenge of decorating for a party for 20 on such a limited budget!

There are people of every faith in our company so I decided to go for a neutral “Winter Wonderland” theme for the party. The starting point for my decor was a roll of white and silver snowflake wrapping paper that I decided to use as a make-shift table cloth. Not only was it cheap, it made clean up a breeze! 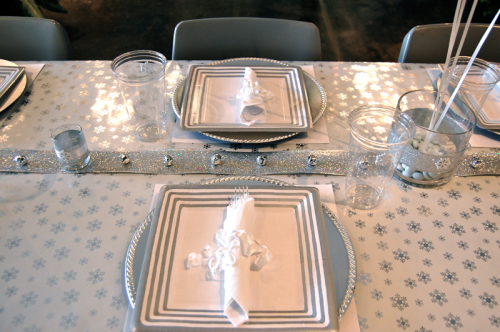 Since the place setting would be the biggest feature of the table, I decided to concentrate most of my budget here. I purchased a pack of white, 12×12 inch scrapbook paper from Michaels to use as placemats. Next, I layered a silver charter plate. I own ten silver chargers and borrowed another six from a friend who I had gifted a set to the previous year for Christmas.

I splurged on large square paper plates that I found at Paper Affair. They matched perfectly and I just had to have them! Mixing the chargers with the paper plates gave a much classier look to the table.

I used white napkins and plastic silverware that we had around the office and rolled them up nicely tying them off with white curling ribbon I already had.

The place settings were completed with clear plastic cups that we had at the office. I spiced each cup up with a sparkly foam snowflake sticker. 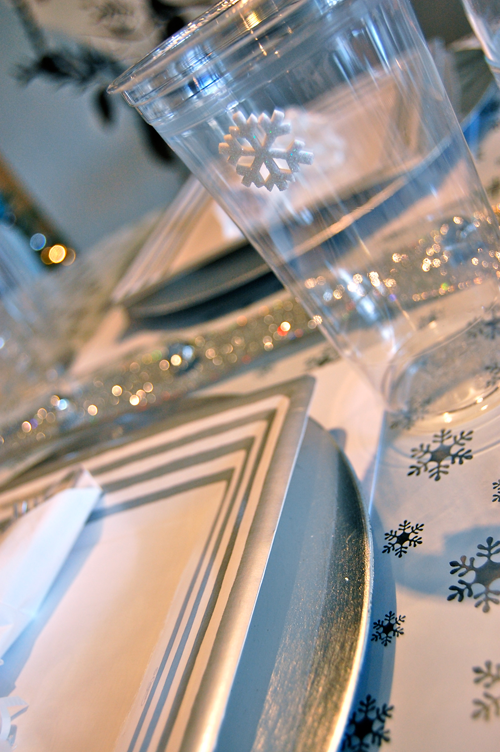 For the centerpieces I decided that balloons would be a cheap way to make a big impact. I bought a pack of white balloons at Michaels, filled them for free using the helium tank in my apartment leasing office, and tied them off using white curling ribbon.

I anchored the balloons into three round, short glass vases that I own. I tied the balloon bouquets to binder clips and hid the clips by covering them with white floral beads, which I had from another party. (The binder clips were a last minute solution that our engineer Gary came up with!)

I used my trusty hot glue gun to adorn each vase with a stripe of glittery ribbon that I bought at Michaels and accented them with glittery foam snowflake stickers. Tea light holders were given the same treatment, except I added a white ribbon on top of the silver for a bit more depth. 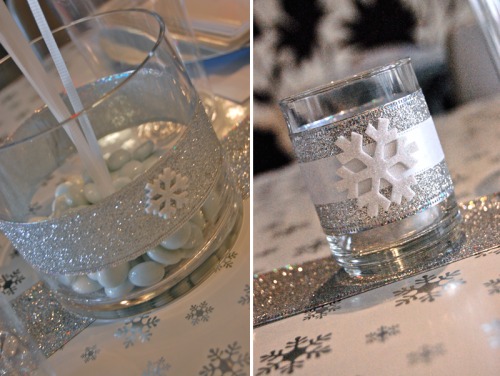 I over bought on the ribbon for the vases and ended up using a spool to serve as a table runner. I spaced the balloon vases and tea lights down the table and filled in the blanks with silver jingle bells.

For the buffet I also covered the tables in wrapping paper. I used extra white scrapbook paper to outline where the dishes should sit and put out serving spoons. I decorated with two silver sparkly reindeer that I use in my home Christmas decor, plus a few snowflake napkin holders I had lying around. I used white chipboard letters that I had from a different party to spell out the party’s theme. 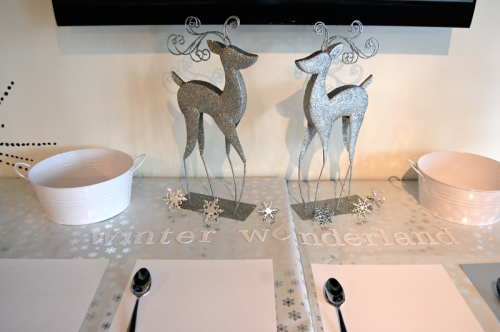 For the party I brought my two Crate & Barrel Cold Beverage Jars to serve water and iced tea. Again, I used the snowflake stickers  and silver scrapbook paper to give them a little interest! 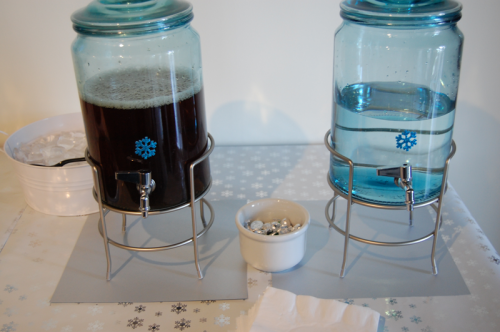 We already had our Christmas tree up and poinsettias around the office which also added to the ambiance. As a finishing touch, I brought my Yule Log DVD and put it up on the flat screen TV that is displayed behind my desk. Everyone got a kick out of it and it added a homey feel to the office! 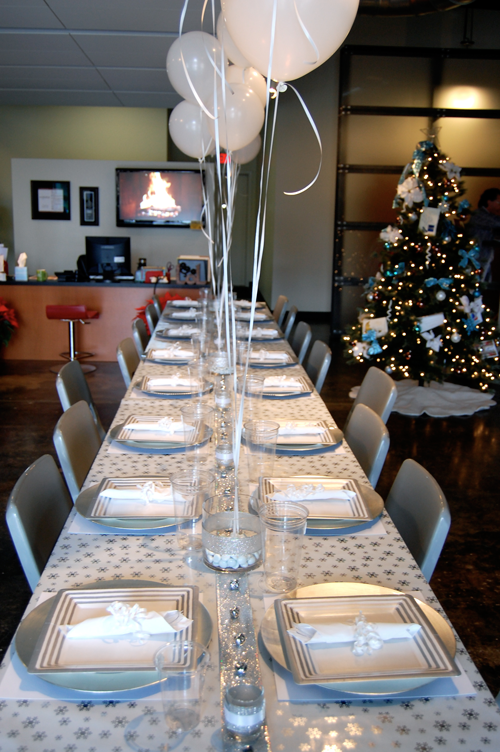 The best part of the party was enjoying the food and the company of my coworkers. The party lasted into the late afternoon and everyone had a blast! Here is a pic of me and Mike and Steve, the two partners in our company: 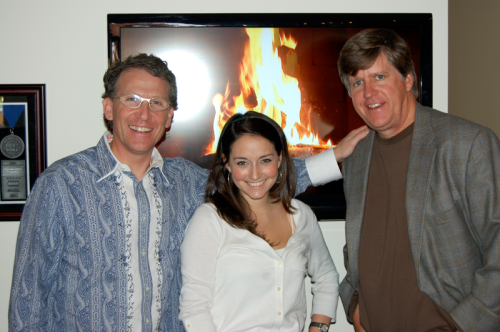 Our holiday lunch was proof positive that you don’t have to have a big budget to throw an impressively decorated party. I had so much fun putting it together and fit all my purchases in just at $50 and a dime!

For those of you who are interested, here are the supplies I used. I broke them down by what I own and what I had to buy. Not everyone probably has as well of a stocked craft/party closet as I do, but simple substitutions could be made if you don’t have all these items. This also makes a good case for making investments in neutral party decor like vases, tea light holders and beverage dispensers that can be used across your various parties, no matter the theme!

Bunny Love: How to Fold a Napkin into a Bunny 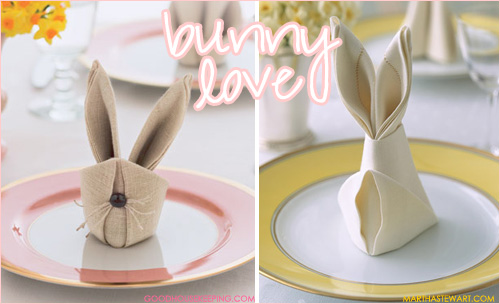 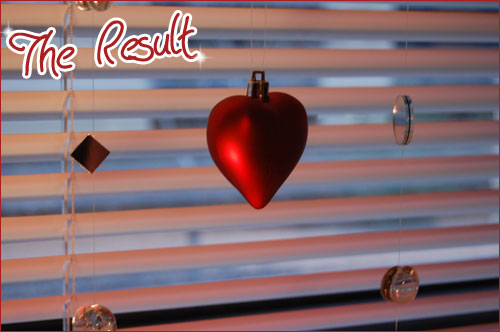 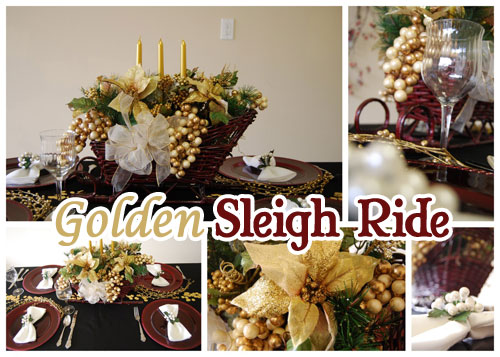